Sitting on a bench in front of Cafe’ Rey Market, and thinking this has the flavor of a general store in the Old American South, or even Old Floirda.

Incredibly hot and the road is dirt. Chickens walk by freely. Down the street you can hear cows mooing.

And dogs, dogs everywhere. You assume they’re strays but the country folk of Costa Rica have a hands-off, lots of freedom attitude towards their canines.

They allow them to wander without collars to go explore the entire village with the faith they’ll eventually come home, and seemingly, they always do.

Each if fat, happy and curious, enjoying the freedom of strays with the bounty of food and affection of being beloved pets.

When a dog struts by Cae’ Rey Market, I will stick out my hand to pet the happy little creatures and one of the local Ticos will say, “That’s Eduardo,” or “That’s Paco,” or “That’s Tito,” …

None are strays but rather beloved pets known and respected by the locals like little citizens. Can you imagine?

Never got close enough to pet a chicken.

Geraldo is the owner. There everyday, often outside in a rocking chair holding court among several Ticos. His son Abel and daughter Arlen are usually inside running the store. All good people whom I’ve grown to adore as they giggle at my broken Spanish and are so quick to introduce me to whatever local is standing around or inside the store.

I’ve gotten to know most of the village through them, and everybody here knows everybody. There are no strangers and few people simply walk past the market or drive by.

Most everybody stops to say hi. If bicycling or walking by, they usually stop to talk for about 15 minutes. If driving, they’ll roll down the window and shout pleasantries for about 5.

Yesterday, an old Ford F-150 pickup truck from the early 90s rolled by. The bed was filled with scrap metal and the truck was rather beat-up and missing paint, acned with rust stains.

3 guys came out from the front, each muscular in jeans and t-shirts well-worn, nearly threadbare and wearing black work boots that’ll outlive everybody. They swaggered and radiated a steely-eyed working-class toughness. If they were white dudes in America, we’d call them rednecks.

When they saw me sitting on the bench by the front door, every single one of them stuck out their hand, greeted me warmly and said, “Pura vida.”

They came outside afterwards and sat next to me on the bench drinking orange soade and eating cerviche in small green containers. Through my broken Spanish, I learned these gentlemen were from the larger and edgier community of Palmer Norte, and they were just as curious about me as I was them. Asking me if I had ever been to places like Miami, Los Angeles or New York City.

At break’s end, they threw their stuff in the trash, smiled as they waved me adios and wished me ‘Pura vida.”

The market generally has most of the stuff I need.

Sometimes they feature homemade cerviche with the right amount of spice and tang. A dish I could eat with every meal 3 times a day every day for the rest of my life. I’ve been told Arlen makes the cerviche. It’s great and they run out of it quickly.

However, the best part of Cafe’ Rey Market?

The family that owns it, that’s there daily, are laidback and fun.
The locals sitting outside on benches and chairs are having fun, laughter the msot common sound.

Men, women, kids and the elderly come and hang out at various times, greet one another with familiar smiles and laughter.

They gossip, poke fun, and wave, always, without fail, they wave when somebody walks by.

Cafe’ Rey Market, the cultural hub of Downtown San Buenas, where everybody knows your name and they call me Ezequiel.

A few times a week, I go there to buy a few groceries, plus a drink, some juice or ice tea, and if available, Arlen’s homemade cerviche.

Then, I park it outside on the bench, drink my drink, eat my seafood and soak up the atmosphere the way you would a favorite bar, and always leave happier than I arrived. 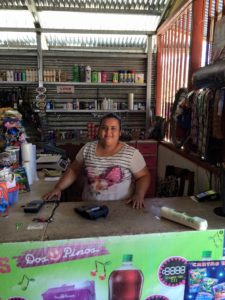 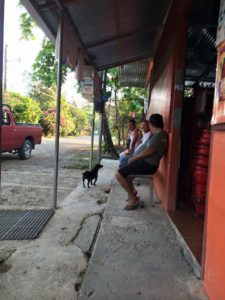