It’s called the Urban Scowl for men and Resting Bitch Face for women.

Surely, my female friends would argue this is not fair. That it ought to be RBF for everybody or Urban Scowl for both genders.

And my more ‘Snowflake-y’ friends would get upset assuming RBF is sexist and the other phrase must be racist because it has the word ‘urban’ in it.

Often referred to as the Urban Scowl because it’s easy to develop one living in big cities in The United States where you don’t want to be bothered by aggressive panhandlers and or potential muggers so you simply adopt a tough looking face hoping others will leave you alone. Eventually, it sticks.

No spring chicken, am I.

At 45, there’s been no election uglier in my lifetime than 2016. It felt like everybody was at each other’s throat.

I no longer discuss politics with anybody. Not because I no longer have opinions but because I’m tired of friendships and relationships and even careers ruined because of somebody’s difference of opinion. Thought Crime is no longer science-fiction, Mr. Orwell. It’s a real thing and both sides are enforcing it.

In January, I arrived to San Buenas overweight, stressed-out, carrying the ugliest Resting Bitch Face\Urban Scowl you’ve ever seen, and felt genuinely exasperated with The United States and concerned for its future.

In San Buenas for over a month and the permanent scowl has disappeared. I sleep soundly every night. It’s harder to scowl when feeling so well-rested and everybody I walk pass in San Buenas smiles and waves. If you meet another North American expatriate, they’ll get so excited, welcoming you with personal invites to dinners and field trips.

The natural rural beauty of this village will cause you to slow down, walk outside and reflect. You will observe clouds floating atop mountains while you float in a swimming pool. Or as you explore outside loving nature, your body will sweat, your natural cooling off process. The local food is high protein, low fat. In other words, through nature walks and quality food, you will lose weight with little effort. Bonus, too, for seafood lovers which Costa Rica excels.

Beauty relaxes you, nourishes your soul as sunsets reflect vibrant, intense colors you’ve never seen in the sky before.

Recently, I swam in the Pacific Ocean at around 4:30 pm and watched a pair of toucans fly along the shore, the setting sun reflecting their multi-colored wing span. The person I was with, another American and former city dweller, could not believe his eyes, as we both bobbed in the water in meditative silence. Only now do I realize how much healing we both needed.

Having a group chat online with several friends back in The States this morning, one volunteered that he is currently taking Zoloft. Another added that he took Xanax. The joker of our crowd said, “I’m old school. I still take Lithium.”

Me? I replied to all, “I take San Buenas. I sleep well every night. I eat well. I look the best I’ve looked in years. I smile all the time and make friends wherever I go. This place may be God’s antidepressant. Everybody should get a prescription.”

Are you ready for yours?

I am the gatekeeper of paradise. 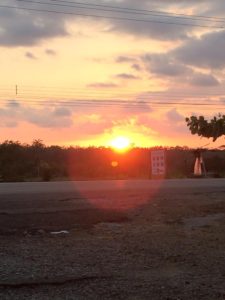